Hatty Hattington was everybody's best friend and a proper handsome fellow. While voyaging upon the S.S. Friendship he as well as his other pals were caught in a storm, resulting in them arriving at a mysterious island run by cats, Hatty was given a mysterious Top Hat which made him the leader of the cats.

Hatty was renowned for being a pretty swell and handsome guy who went on adventures with his hundreds of friends... that is until he was shipwrecked on a mysterious island and given a pretty villainous top hat by some of the cat natives. The hat made him the leader of the cats, but he was too depressed to lead them because the spirits possessing the hats were too conflicting to allow any meaningful decisions. As a result, he sat on his throne looming all day.
Eventually, the cats grew tired of Hatty's bull- uh, I mean, nonsense and started rebelling against him (with fire). Luckily, his old friends came to rescue him, but had to carry him out.
Upon arrival back on the SS Friendship, his friends were shocked and upset to see he had gone into a comatose-like state, not reacting to the things he normally likes, even hugs. In the end, a wave caused him to fall overboard. As the hat sunk to the top of his head, a green glow was emitted and a laser launched upwards. What happened during the scene remains a mystery...although the narrator claims to understand what happened.

Hatty is paperwhite with a box-shaped head. He has two black eyes that are far apart from each other, and a line going across his head for a mouth. He wears a brown suit (with gold trimmings while possessed) and a red scarf-tie.

Once the hat is placed on him, he has large streams of tears flowing from his eyes, and sits limply, unable to move.

While not much of him is seen before becoming corrupted, the narrator describes Hatty as "like King Friend of Friendship Kingdom, friend to one and all, and the walking definition of a handsome gentleman".The narrator also mentions later that Hatty went out of his way to give everyone flowers and gifts, and at the end that Hatty loves hugs.

Once the hat corrupts him, he is utterly unresponsive, with a constant stream of tears flowing from each eye. The narrator claims this is because as a result of too many different spirits possessing the hat, the hat has become useless since all of their conflicting viewpoints turned its powers into a jumbled, confusing mess incapable of making any decisions.

However, it is also implied that the influence of the hat makes him obsessed with collecting gems, and he occasionally can be seen explaining things to the player, and at one point a voice on the intercom is presumed to be him.

Hatty was seen in the first cutscene aboard the S.S. Friendship 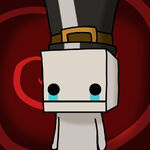 Hatty attempting to give a present

After putting on the hat, Hatty is stuck in a lifeless state.

Giving a flower to the Lovely Lass

"Where's all the sparkly monies at?

Hatty without his hat

Another shot with him seen with the hat on

Hatty, attempting to drink hot cocoa in the final cutscene

The narrator is theorizing that the Cat Guards were created from a science experiment gone wrong.
Add a photo to this gallery

They gave him an old hat

The hat had mythical powers

They hoped that Hatty will become their leader

Hatty in the gift shop

The message you get upon unlocking your first prisoner

The screen before a time trial

Hatty on the Online player screen.
Add a photo to this gallery

Hatty and his Cat Guards

Hatty, his pet, and his weapon, all about to fight some bears.

Hatty, as seen on the character selection screen.
Add a photo to this gallery

Hatty can be seen to the left

New Character screen for Hatty Hattington.
Add a photo to this gallery
Retrieved from "https://battleblocktheater.fandom.com/wiki/Hatty_Hattington?oldid=6638"
Community content is available under CC-BY-SA unless otherwise noted.